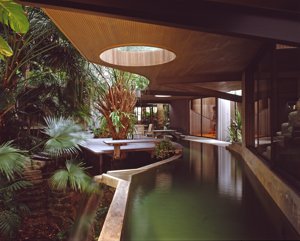 You can’t be a Realtor in the Coral Gables, Coconut Grove or South Miami area for long without hearing the name Alfred Browning Parker.   I recently had the pleasure of learning more about this great Florida architect while selling one of his masterpieces, a modern home built in 1950, located at 5189 Alton Road on Miami Beach.

A.B. Parker put a mark on South Florida by creating his brand of modernistic architecture to blend in with the characteristics of our tropical area.  He, along with other modern architects of his era, adhered to the principle of "form follows function", and that design should have a purpose, not solely be ornamental. This swayed from the Victorian home design age of the past.

Parker opened his office in Miami in 1946, and designed 500+ projects over 60 years.  He received a lifetime achievement award from the American Institute of Architects, and he was a Living Legends Honoree by the Dade Heritage Trust.   Post retirement, he continued to design a few dozen projects while joining the faculty in the School of Architecture at the University of Florida.  He is still recognized today as “Florida’s best architect ever.”

The majority of Parker’s projects were regional to South Florida, from a complete subdivision for incoming GI’s after WWII in the 1950’s, to middle class and luxury homes in Coral Gables - Gables Estates, Coconut Grove, South Miami, and Miami Beach. He also designed commercial projects, such as the Hope Lutheran Church Sanctuary on Bird Road, the Miami Marine Stadium, and several other important works, including a proposal for a memorial in NYC after 911.  Several of his homes were featured in House Beautiful magazine. I am told that the property on Alton Road is his only remaining build on Miami Beach, and fortunately being cared for by its new owner, a retired architect.

Parker’s philosophy and work have a consistent element still desirable today. He two main influencers were architect Frank Lloyd Wright and ecologist and University of Miami professor of tropical forestry, Dr. John C. Gifford.  Parker developed a strong design viewpoint from his respect for the nature, its power and resources.  Many of his homes utilized cypress wood. His home office in Coconut Grove was said to feel like a treehouse.   Although he still practiced in his later years, in the 1980’s he shifted his attention predominately to the design of renewable and alternative energy systems and his Solar Reactor Corporation.